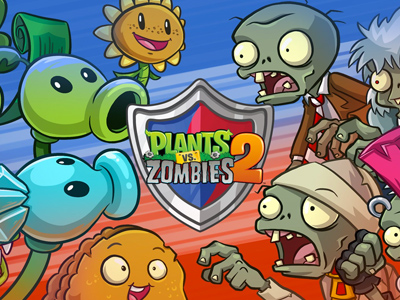 Electronic Arts have released Plants vs Zombies 2, the much-awaited sequel to the award-winning smash-hit Plants vs Zombies created by PopCap Games, and continues where the first title left off. Players are tasked to fortify their lawns with various plants in order to hold back the seemingly endless zombie horde bent on eating the players’ brains!

Following the defeat of Dr. Zomboss in the first game, the player finishes off the remaining zombies that are still attacking the lawn. Once they were all defeated, the player finds a Hot Sauce and gives it to Crazy Dave so that he can enjoy eating his taco. Crazy Dave enjoyed eating his taco so much that he wants to travel back in time to eat it again. The player is then introduced to Penny, a supercar that can time travel.

Penny, Crazy Dave, and the player attempt to time travel, but instead of visiting the moment when Crazy Dave was just about to eat his taco, they were blasted in Ancient Egypt 4,500 years back into the past! They then learn that even back then, there are still zombies raring to eat the brains of the humans. So it is up to the player to once again defeat the undead menace and save the human race! 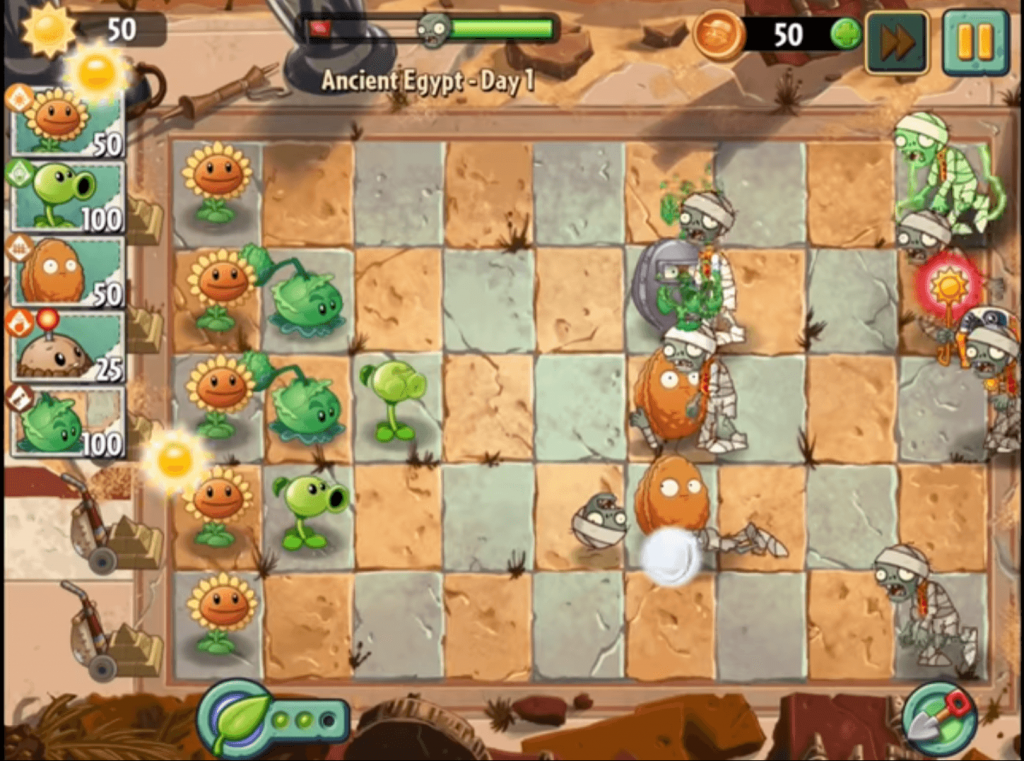 Plants vs Zombies 2 returns with its memorable tower defense-like game mechanics. Iconic plants such as the Sunflower and the Peashooter can be planted on the lawn to help players thwart the zombies. That said, Plants vs Zombies 2 introduces new plants as the players progress through the story mode.
Each new area that the player visits contains new plants that give players new offensive and defensive options. For instance, Ancient Egypt has the Bloomerang – a plant that fires boomerangs and hits enemies twice, the Iceberg Lettuce – a plant that freezes zombies that step on them in place for ten seconds, and the Bonk Choy – a plant that balls up its leafy bits into fists and wallops the closest zombie it can reach.

Apart from the new plants, players also have access to various power-ups in the form of Seed Packets. Each Seed Packet provides different buffs to the players’ plants, from increasing their offensive or defensive stats, speeding up the planting time, to outright giving plants new attacks. These new gameplay bits add variety to the tower defense mechanic of Plants vs Zombies 2, making sure that the gameplay remains fresh.

Another new addition to Plants vs Zombies 2 is the ability to play with other players online via the Arena. In this game mode, players go head-to-head and try to outlast the zombies approaching their respective lawns. The player whose lawn has held back the most zombies after the time limit wins.

In Arena mode, the zombies are more tenacious – they have more health, survive multiple instant kills, and devour plants at a faster rate. Moreover, if any of the zombies manage to activate the lawnmower, the player whose lawnmowers got activated will receive a penalty.

Similar to other PVP game modes, players can climb the ranks and collect different rewards based on how many matches they have won. This new game mode adds another fun element since players compete against one another to see who has the best plant-based strategy when dealing with the undead.

With tons of new features and a zany story, Plant vs Zombies 2 handily continues the amazingly fun and quirky tradition of the first game.